Graviola has shown a lot of promise, the Laboratory tests show Graviola to have anti-viral, anti-parasitic and anti- cancer properties.


Graviola Warnings:
Long-term use of Graviola may lead to die-off of friendly bacteria in the digestive tract due to its antimicrobial properties. Supplementing the diet with probiotics and digestive enzymes is advisable if this product is used for longer than 30 days.

Do not use during pregnancy or breast-feeding.
Do not mix with antidepressant drugs, as it may amplify the effects.
Consult your doctor first if you are on any medication. 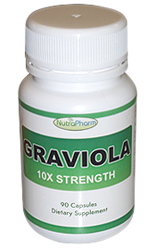