Ginkgo biloba comes from the ginkgo tree, one of the heartiest and oldest trees around. The ginkgo tree has existed unchanged for more than 150 million years, and only now are we rediscovering the benefits of these magical gifts from mother nature, have to offer us.

Each capsule contains a 120mg dose, of Ginko Biloba extracted to 24% Ginkgo flavone glycosides, and 6% terpene lactones, to give you the most potent extraction.


Directions?
Take 1 or 2 capsules per day.

What are in the capsules?
Each capsule contains: Ginkgo biloba extract 120mg (24% Ginkgo flavone glycosides, and 6% terpene lactones) 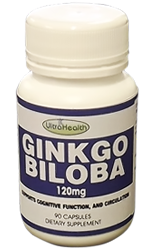